Nail polish is undoubtedly a beauty item that almost every girl has, there is always a favorite shade that you want to keep as close and safe as possible. If you paint your nails yourself or you have tried to a couple of times, you would know how frustrating and unpleasant it is when your nail polish thickens.

Thick nail polish makes application on the nails hard and uneven. How much worse when it is your favorite shade that clumps up? You would undoubtedly be on the lookout for ways to return the nail polish to its normal consistency.

There are a couple of tricks that would come in handy in that aspect, all you have to do is read further as we share some tricks to fix thick nail polish with you.

How To Thin Out Nail Polish

One of the most recurring problems with nail polish is when it gets very thick and almost impossible to put on.

Mixing the nail polish should be the first thing you try, especially if your nail polish has only thickened a little or you just noticed it begin to thicken.

Most people’s initial instinct when they grab a bottle of nail polish and realize it has thickened is to begin to shake the bottle vigorously in an attempt to restore it to its former state. Almost every lady that has had her nail polish thicken can agree that they tried to shake it to make it better.

Unfortunately, that is an option you should completely avoid because it creates air bubbles that eventually cause the nail polish to chip off easily when made use of. Asides from making the nail polish chip off, shaking it could also make the nail polish thicker instead of thinner as you had wished to achieve by doing so.

2. Get A Nail Polish Thinner

After putting two drops of the nail polish thinner in your nail polish, seal it tightly and carefully roll the bottle between your fingers, as earlier mentioned shaking the bottle will do more harm than good so it is best to avoid doing so. Although this is the best and most effective way to remedy thick nail polish it is not a readily available option to everyone.

Of course, there is a DIY method if you can not run to a store to get a nail polish thinner at the moment.

You can also thin out your nail polish with the use of hot water. Get some hot water and pour it into a bowl, place your thickened nail polish into the bowl and allow it to sit for two minutes in the bowl.

After two minutes have gone by, carefully take out the nail polish from the bowl of hot water but be very careful with it because the bottle would still be hot, roll it carefully between your palms so that the consistency of the nail polish evens out, it can not be said too much so make sure you do not shake the bottle in a bid to mix the product.

This method is effective as well and though it may not give results as perfectly as a nail thinner, it is a readily available option and it does not cause any damage to your nail polish.

In this case, it is the last resort while attempting to even out lumpy or thick nail polish. Use a few drops of either pure acetone or any nail polish remover of your choice into your nail polish and mix by rolling the bottle gently between your palms or fingers for it to mix properly.

This is the last option and one that would cause damage to your nail polish in the long run, so use this only when you have no other option or the nail polish has only little left of it and you are prepared to bid the rest goodbye.

5. Seal Tightly And Store In A Cool Place

After trying either of the above methods, you would still need to make sure your nail polish does not thicken all over again.

Sealing your nail polish tightly whenever you are not making use of it, it is when air gets into nail polish that it begins to thicken and clump up. If you have other nail polishes that have not yet thickened, you should make sure you always seal them tightly as a preventive measure.

Can you use rubbing alcohol to thin out nail polish?

You can use any solution with more than 50% alcohol present to thin out your nail polish, this method is not advised as it would ruin your nail polish just like acetone, but if alcohol is the only thing you have and you are in a hurry, a few drops should do the job.

Why is my nail polish sticky and won’t dry?

Your nail polish is most likely sticky and unable to dry because you did not try to thin out the clumps forming before application, or you applied one too many coats of nail polish at once. You should try using acetone to smoother it a little and a glossy top coat to make sure it dries quickly.

It is safe to say you can bid your worries about thick nail polish goodbye. As unpleasant as having to try putting on thick nail polish is, it is relieving knowing that the ways to thin out nail polish and make it even is easier and can be done in the comfort of your home if that’s where you get your nails painted.

Make sure you do not shake your nail polish as that will cause it to get thick and we do not want that, instead seal it shut tightly at all times and store it in a cool and dark place. 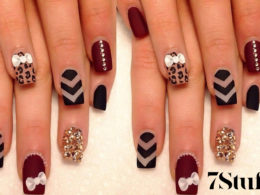 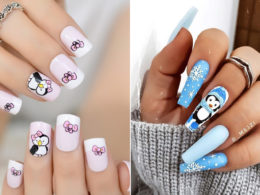 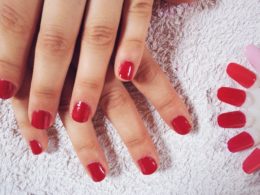 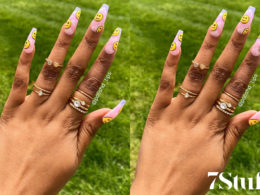